What is a tatam? 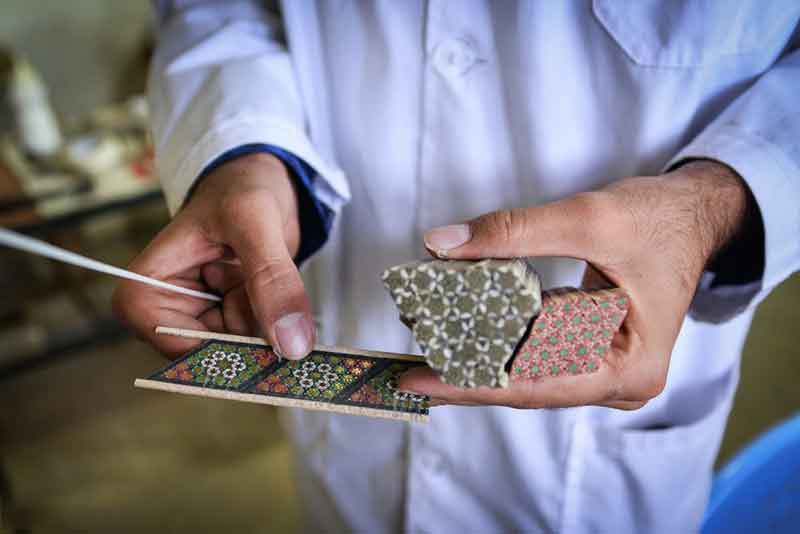 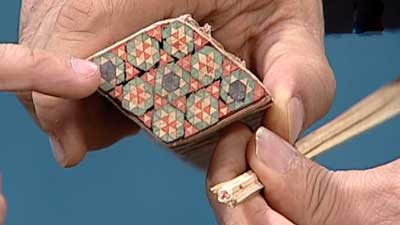 Tatātam (Persian: خاتم‎) is an ancient Persian technique of inlaying. It is a version of marquetry where art forms are made by decorating the surface of wooden articles with delicate pieces of wood, bone and metal precisely-cut intricate geometric patterns. Tatam-kari (Persian: خاتم‌کاری‎) or Tatam-bandi (Persian: خاتم‌بندی‎) refers to the art of crafting a Tatam. Common materials used in the construction of inlaid articles are gold, silver, brass, aluminum and twisted wire.

Contents
1 Design and construction
2 Examples
3 Current status
4 References
Design and construction
Designing of inlaid articles is a highly elaborate process. There are sometimes more than 400 pieces per square inch in a work of average quality.[1] Thin rods of different coloured woods, ivory, bone, brass, silver, etc. were glued together into long bunches that could have a round, rectangular, or polygonal cross-section. The bunches were cut into thin slices and combined with others to create intricate patterns The David Collection. In each cubic centimetre up to approximately 250 individual pieces can end up side by side, smoothed, oiled and polished. Inlaid articles in the Safavid era took on a special significance as artists created their precious artworks. Woods used include betel, walnut, cypress and pine. These works include doors and windows, mirror frames, Quran boxes, inlaid boxes, pen and penholders, lanterns and shrines.[2][3]

A simple Tatam marquetry box decorated with geometric patterns of triangles and 6-point stars on its sides, and a floral design on its lid
The ornamentation of the doors of holy places predominantly consists of inlaid motifs. Samples of these can be observed in the cities of Mashhad, Qom, Shiraz and Rey. In the Safavid era, the art of marquetry flourished in the southern cities of Iran, especially in Isfahan, Shiraz and Kerman. The inlaid-ornamented rooms at the Saadabad Palace and the Marble Palace in Tehran are among masterpieces of this art.

Current status
Tatam is mainly practiced in Shiraz, Isfahan, and Tehran. The art of inlaid and sudorific woodwork is undertaken in the workshops of the Cultural Heritage Organization of Iran, as well as in private workshops.

Master Mohammad Bagher Hakim-Elahi (محمد باقرحكيم الهي) was a master of this art, and learned the techniques from Master Sanee Tatam in Shiraz. Later in life, in the early 1950s, he moved to Tehran, where he lived until the end of his life in March 2012. He continued making Tatam master pieces, ranging from small frames, and jewelry boxes, to large items such as coffee tables, bed frames, dinner tables, and large chandeliers, some of which are currently in Museums in Iran, but most are in private collection all around the world, including southern California. He also taught the art to his younger brother Asadolah Hakim-Elahi (ﺍﺴﺪﷲ ﺤﻛﻴﻢﺍﻠﻬﻰ). Asadolah died from lymphoma in the late 1970s when he was in his mid 40s.