What is a Turquoise? 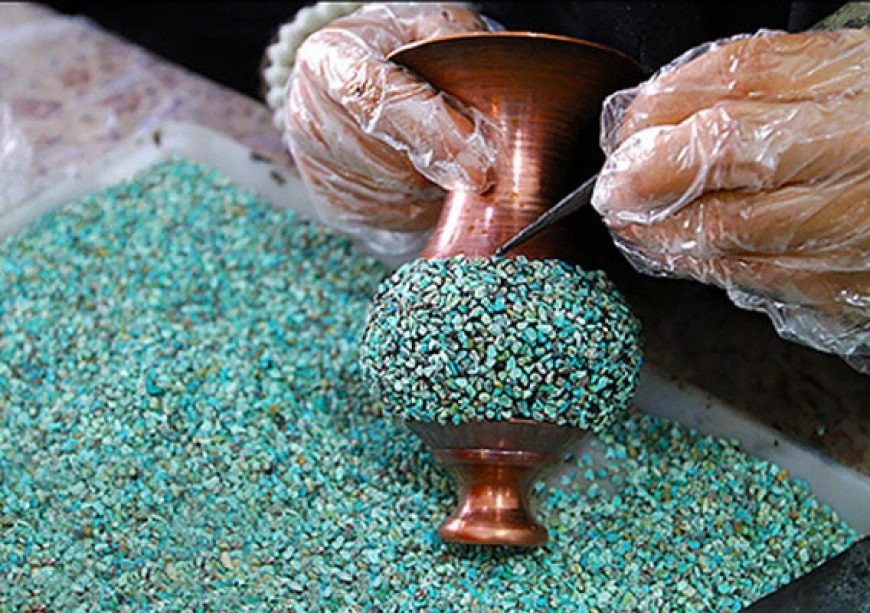 Turquoise inlay is one of the few branches of handicrafts that inherit the elegance and appeal of the best products of handicrafts, as it is said the antiquity of this industry

Turquoise inlay is one of the few branches of handicrafts that inherit the elegance and appeal of the best products of handicrafts, as it is said the antiquity of this industry dates back to around sixty years, in that period a person named Joseph Hakiman popularly known as Mohammad Reza in Mashhad initiated his workmanship on turquoise ornamentals like bracelet, flower brooch, earning, etc. and around twenty years later, this industry was taken via another artisan named Haaj Dadash from Mashhad to Isfahan.
In Isfahan, turquoise inlay besides jewelry were used in vessels like plate, glass, rose water sprinkler, and others and some workers in the Haaj Dadash & Sons workshop are working in this field. Even segments of the craftsmanship (arrangement of turquoise on the crafts) are carried out via lady workers and artisans.
One of the collateral workmanships of turquoise inlay industry is the preparation of the framework which is carried out separately in goldsmith factory. Two of the goldsmith artisans that had undertaken framework preparation workmanship for the Haaj Dadash workshop gradually entered the turquoise inlay workmanship and at present are even engaged in the turquoise inlay work.
In the present scenario, the turquoise inlay industry is prevalent in Isfahan and the employed artisans in this field are limited and are exclusively narrowed to fewer.
• The manufacturing and production of turquoise inlay
One of the products of turquoise inlay generics to ornamentals and or utensils consists of an object viz. copper, brass, silver, nickel and or bronze where the particles and small pieces of turquoise stone is settled side by side on segments of its surfaces in a mosaic form and in this manner a special display is attributed to it.
The manufacturing and outlaying of such a product is composed of two general stages:
A) Goldsmithing: Goldsmithing consists of manufacturing and preparing a proposed object with one of the metals that is above-mentioned. This workmanship is carried out via goldsmith artisans or producer of metals by hand, press or with the help of both.
After the manufacturing of object’s broad form generic of utensil or ornaments, the section that has to be turquoise inlaid is marked and its periphery is introduced a thin metallic thread (from the metal type of an object itself) named as “Kondan’’ and soldered, and the section that is around the proposed form so-called a wall is created with a height of two to three millimeters from the vessel surface where this work is generally carried out by artisans and sometimes through turquoise inlay artisan himself.
In case the prepared section for the turquoise inlay is occupying much of the surface and its background seems empty, then smaller threads from the same insignificantly engraved metal in the ornamental form (flower and shrub, etc.) is introduced in it and is again soldered.
This operation besides increasing attractiveness of the work’s form attributes a greater strength to the turquoise inlaid surface.
B) Turquoise inlaying: Before anything the turquoise inlay artisan will purchase the unusable turquoise stone rubbles from the turquoise sculpturing workshops and or turquoise mines of Mashhad, Neyshabur and Damghan.
Since these stone rubbles are associated with modulus of soil and ordinary stone rubbles, initially they are separated and cleaned from the other wastages. Later, the turquoise stone rubbles are segregated and so-called seed graded so that in the manufacturing of each turquoise inlay product, the unsymmetrical turquoise block with the turquoise inlay work surface is utilized.
In the next step, the proposed object is heated (around 30 ºC) and during heating on the segments that has to be turquoise inlaid ‘’Walnut shell’’ is spread whereby the shell powder is almost melted and the related segment surface is covered.
When the shell is still soft and melted on the object’s surface and has an adherence state, a quantum of the turquoise stone rubbles which are earlier being prepared according to the required size are placed on the work. The stones should be placed side by side in a manner that nil space is left between them.
For filling the tentative spaces between turquoise stones, the heat is little bit increased (around 40 ºC) and another quantum of shell powder is sprayed on the stones until the shelly layers are melted and later with the addition of the tiny stones they will try to completely position the stones in their respective places or better said perfectly settle on it. This operation is generally carried out with hands in a manner that by hand, they pressurize upon turquoises surface till they are well stuck to the surface of the work.
After cooling of an object the shell parts become tough and hardened. After this stage, the parts